After Colin filled up with oil, we were on our way out of the hotel. 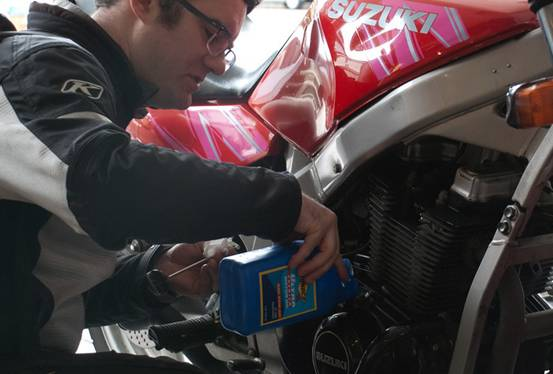 We headed about a mile to a parking lot to do the ‘Slow race’. For those not familiar with the terminology, it’s riding as slowly as possible for the width of 5 parking spaces. If you leave the spaces, or put a foot down, the clock stops. Irv won this with a 19.6 time.

I was goaded into it for fun, and wouldv’e come in 2nd (if I were competing) with a 16.0. I think. Not 100% sure on the times, as I was suddenly a bit distracted. While I was on the line, it was noticed that my rear tire was fairly flat. We quickly figured out that it probably had something to do with that 1 ½” screw that was in it. 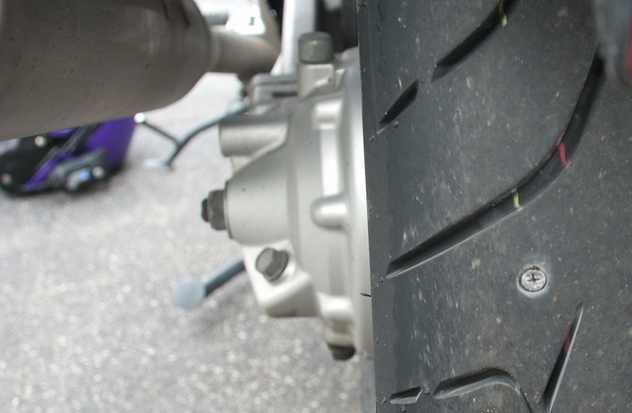 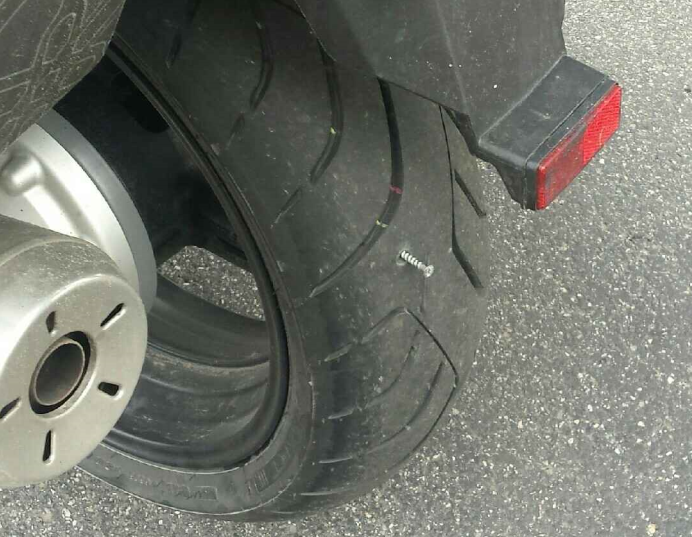 No problem, right? I pulled my seat off to access the tire repair kit I carry, and the tire was plugged up in short order. I got out my compressor to re-inflate it, plugged it in, turned it on, and promptly blew the accessory outlet’s fuse. I kinda need that to keep my phone powered for navigation (of course, OsMAND was being finicky the whole trip, don’t know why I wanted it). 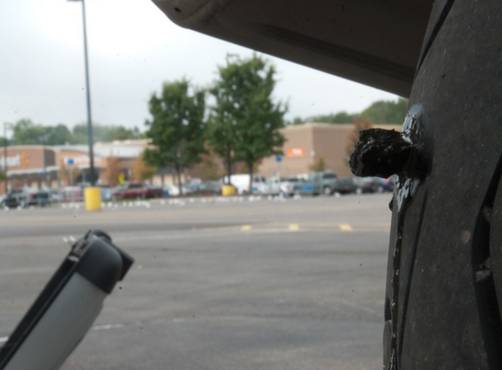 Fortunately, Justin had a hand pump. While he was pumping that up, the rest of us were trying to figure out how to get to my fusebox. It’s only 4 connectors; how hard could it be? Well, it turns out there’s apparently a secret that one needs to discover in order to get the panel removed. It took about a half-hour to remove and another 15 minutes to reinstall (another secret, I guess) for a 15-second fix. Ugh.

While this was happening, a sudden gust of gravity caused Irv’s VTR to meet the ground, cracking his only mirror. A quick burst of tape and a spare mirror resulted in not only a functional original mirror, but also a stylish bar-end mirror update for the ancient sport-bike. (the latter of which, we don’t seem to have a picture of….) 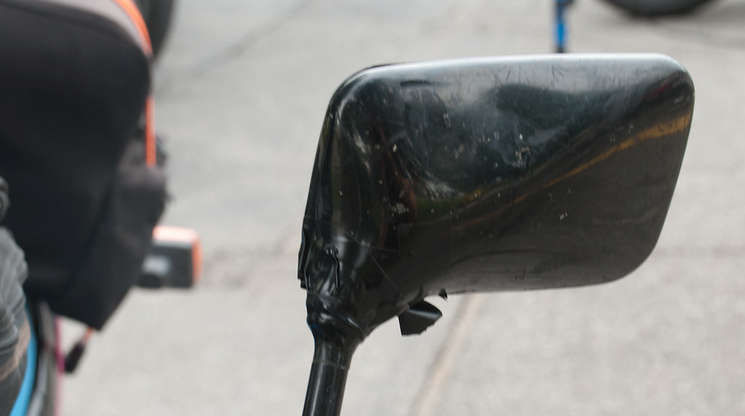 Once back under way, we continued on around our counter-clockwise route. Justin and Simon needed to get back home, so broke off around 12:30. And then there were 5. 4 competitors, and me carrying the toolkit.

As luck would have it, we’d need those tools again. Around 1:30, in the middle of farm country with nothing around, the chain on Lou’s bike gave up the ghost. Or at least, gave up the master link. Somehow, the plate had worked its way loose, and the master worked its way out of the chain. At least there was a weak cell signal available, and a tractor supply store was found about 23 miles away. 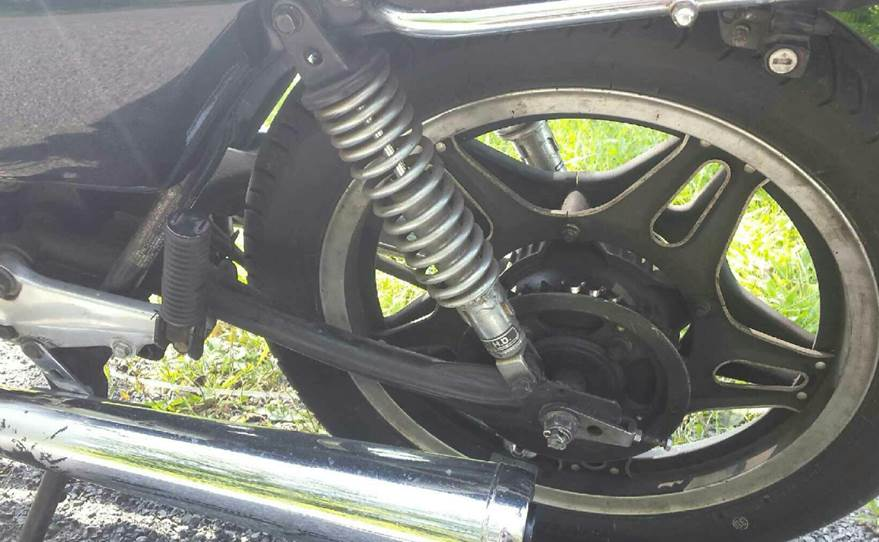 2 of the guys left to go see if they could find a master link there; the rest of us sat around watching the corn grow, or caterpillars crawl across the road. 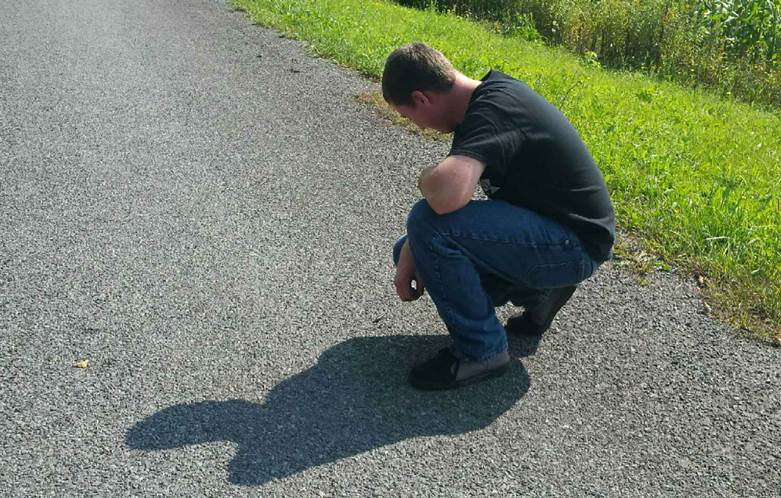 By the time they got back, boredom and ingenuity had gotten the better of us, and the chain was not only rethreaded around the sprockets but ‘fixed’. Yes, it did roll across the rear sprocket. No, we did not try through the front; why mess things up?

Then the real fix took about 5 minutes, and we were off again.

We stopped for lunch in Skaneateles, and off again. Our next stop, Canandiagua.

Everyone made it back to our Start/Finish at the Inn on the Lake.

After making it back to the hotel, Irv noticed that the front tire on his bike had developed a crack in it. Of course, the tires on both VTRs were old. Neither bike had a tire with a date code from this century, so I’m kind of surprised they did make it the whole 330-ish miles. 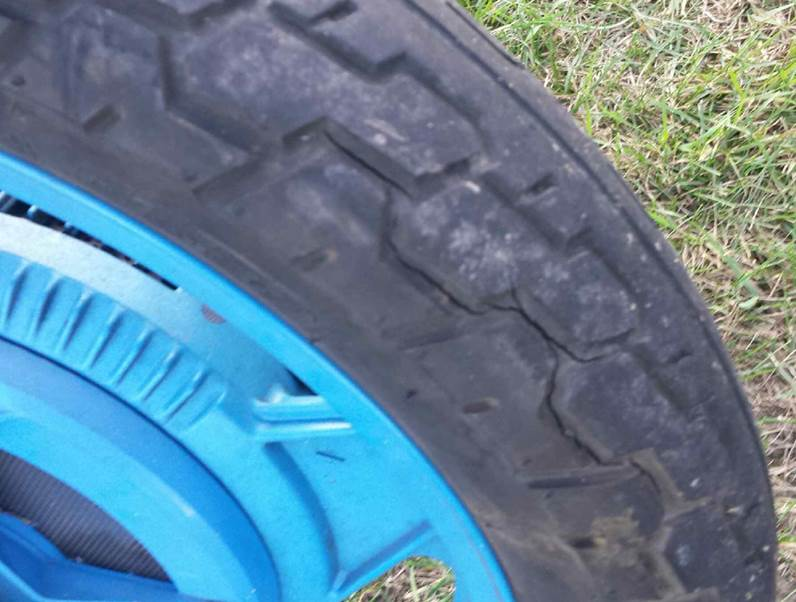 Congratulations to Irv, who, on his $300 (yes) 1998 VTR 250, became the winner of the Inaugural Reliability Rally, taking 1st place in (at least) Purchase Price, Fuel Economy, and Slow Race and tying, with the other VTR, in Reliability, by suffering NO mechanical issues at all. Emotional and mental issues were not factored into the score. He also took a lot of crap about the pink on his bike. 2nd place went to Chase; Colin (who, oddly, took no crap about the pink on his bike) & Lou tied for 3rd (both got dinged on reliability). For his effort, Irv wins a warm bottle of Buckler non-alcoholic beer. He’s thinking about making that very same bottle the prize for Reliability Rally 2018. 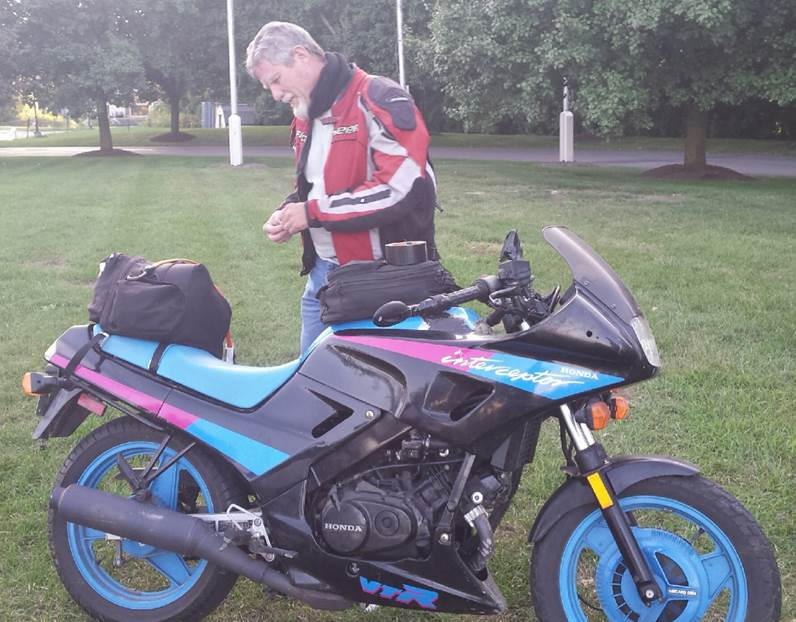 Overall, a good time was had, and we’re hoping to do this all again next year. 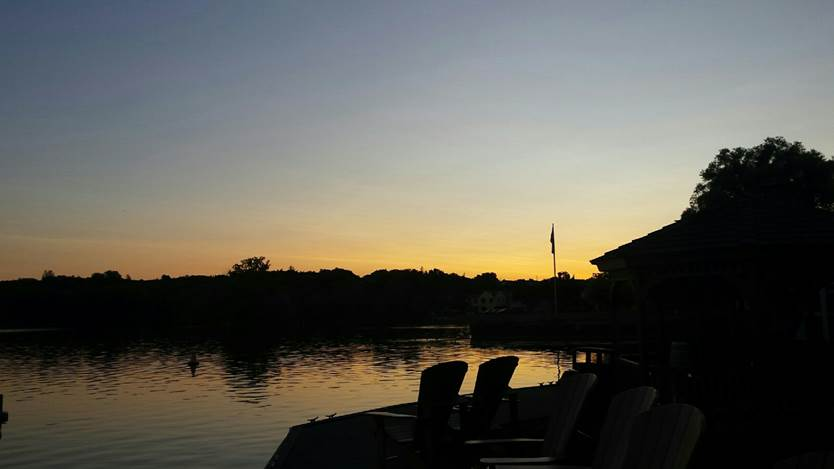